Cheers to the freakin’ weekend!  I think those are some of Rihanna’s best lyrics because who doesn’t love to chuck up the deuces at the end of the day on Friday? And as the song says… “Life’s too short to be sittin’ around miserable…” This is one of many theme songs to celebrate the initiation of America’s idea of a mini hiatus from the “mandatory” 5 -day work week but if you’re anything like me – no music needed!  Running out of our offices at 5:00 pm (on-the-dot) we usually hear an echo of “Have a good weekend!” “Do you have weekend plans?” from nosy co-workers. What a great feeling when you can say yes to the latter question. Yes! I have plans! Then hop on the elevator before they can ask any more questions. 🙂

I decided to take a weekend trip to Memphis, TN last weekend. Why Memphis? Why not?  I’m willing to travel to any area of the planet that I have not previously trodded. Plus it’s the place where Martin Luther King, Jr. spent his last day, where Rock N’ Roll got it’s wings, and where many musicians got their start back in the day. So I went! And it was fun.

First stop…Graceland! Not that I’m a big Presley fan or anything, but who’s not interested in catching a glimpse of the infamous house of the King of Rock!


It was dark so this is the best I could do on Presley’s actual home photo but you get the idea. If not go visit it for yourself! I was over the musically gated mansion quickly and wanted to see something else.  My friend who is from Memphis was the best tour-guide ever…and a really good photographer too! The next stop was the Lorraine Motel, more recently known since 1991 as the National Civil Rights Museum at the Lorraine Motel.  It was closed of course since it was night-time, but I wanted to see it anyway. 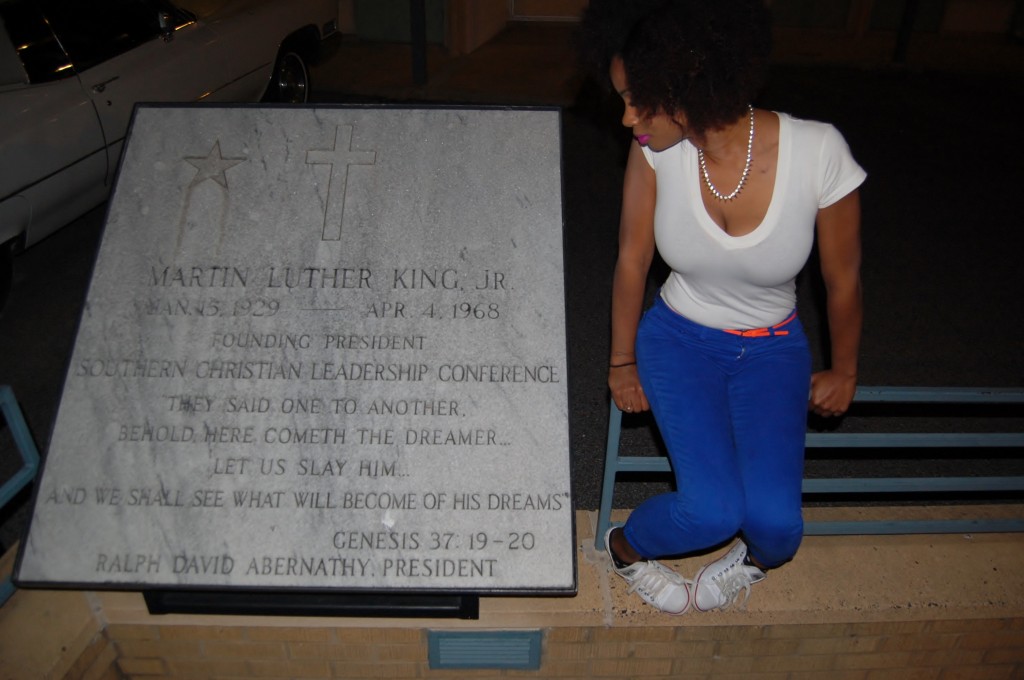 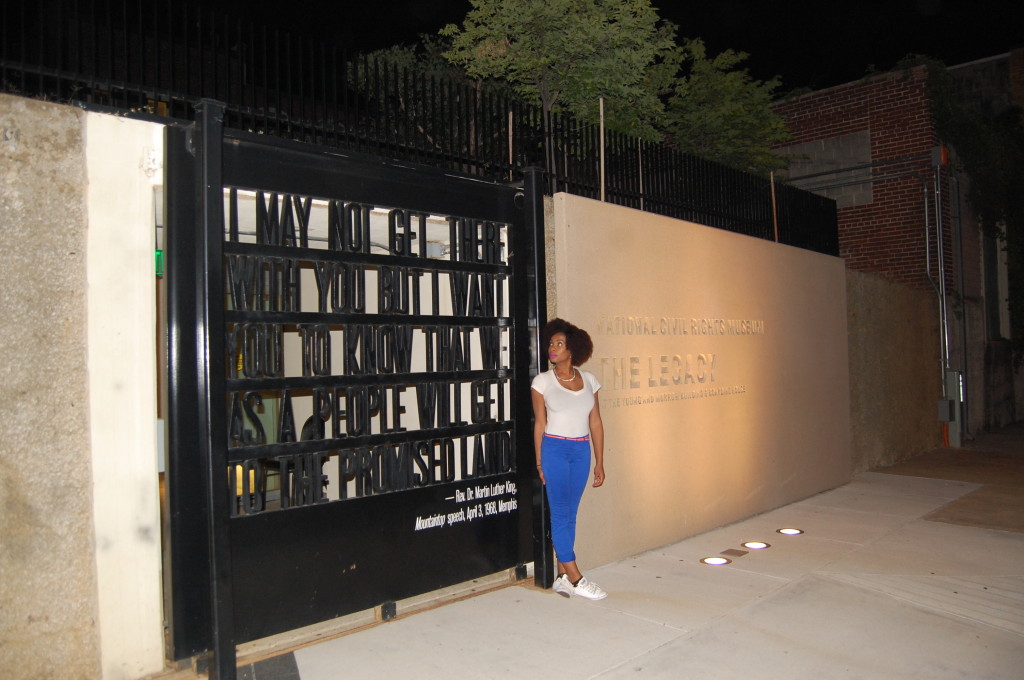 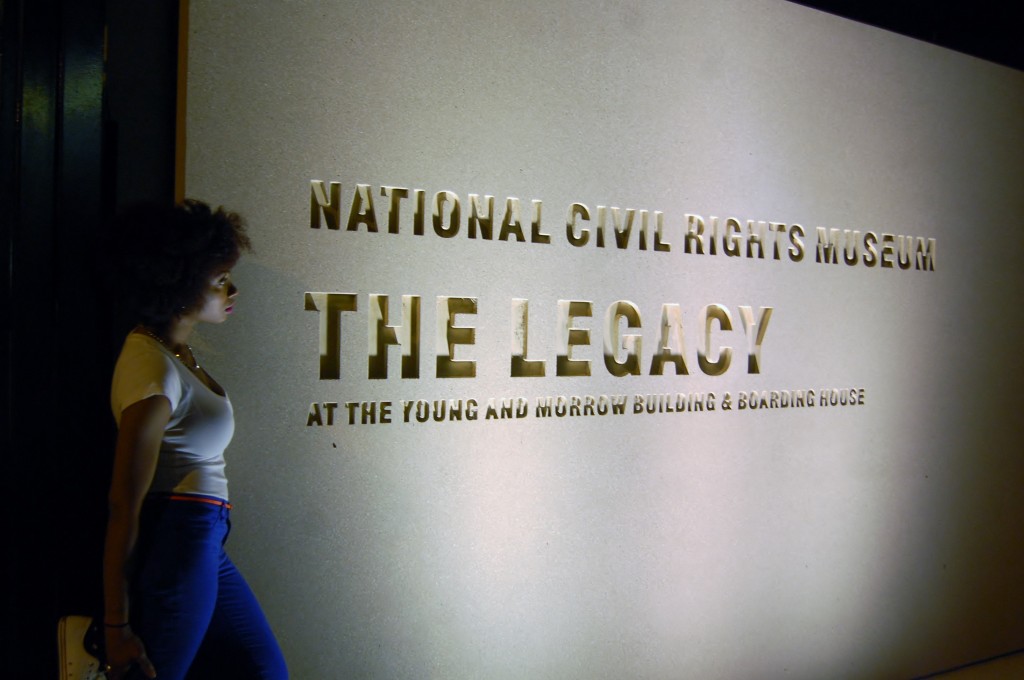 There was something very somber about visiting this site at night. It was dark and quiet. Room 306 overlooked  us from the second story of the motel with a red and white memorial reef on the door in memory of what happened outside of that door at 6:01 p.m. on April 4, 1968. 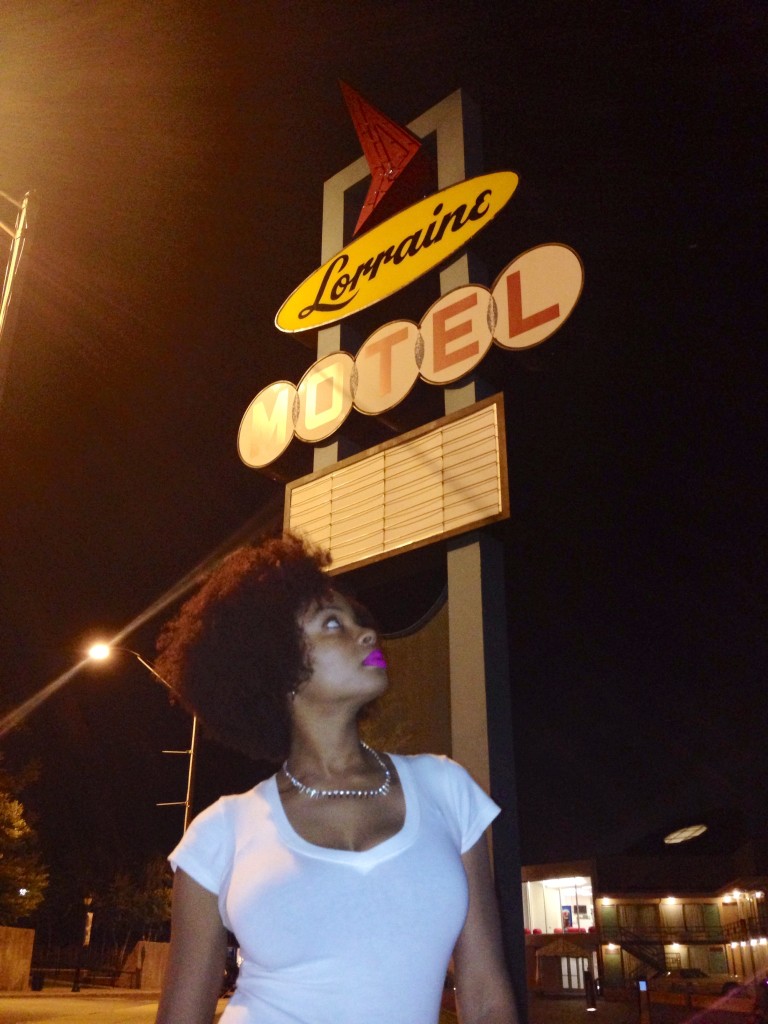 We went back to the Motel/Museum the next day and spent quite a few hours there. The museum traces the history of the Civil Rights Movement in the United States and it’s very detailed.  After being black in America for so many years (all my life) I love it when I can learn something new about my history that I didn’t previously know. That’s what this museum did for me; it was so detailed that I learned several new facts!


The infamous Doll Test was displayed with the dolls that were used by psychologists Kenneth and Mamie Clark back in the 1940’s to study the effects of segregation on children.  There were dolls of both Caucasian and Black persuasion used as subject matters for the test, and children between the ages of three to seven were asked to identify which doll they liked best. The majority of the children chose the white doll; a testament to the effect of segregation on a child’s self-esteem. The results of this test were used as evidence in the famous “Brown v. Board of Education” trial.  That was something I didn’t know!  Recently the study was done again, and unfortunately the results are not much different…

The story of Rosa Parks, the 42 year old woman who sat in the White section of the Montgomery, AL bus in 1955 was a topic of display. The museum had a bus on display that you could board, sit, and walk around in. The seats were so small! It makes you wonder if people back then had no cause for personal space or if we are just bigger now all together. Anyway, I really liked the Coke ad on the front of the bus. It looked like a real Coke bottle top. 🙂 This exhibit is called “The Year They Walked”.  ~ The only tired I was, was tired of giving in.” – Rosa Parks


The sit in. This exhibit is titled “Standing Up by Sitting Down”.


A Freedom Riders bus set on fire by more than 100 Klansmen outside of Anniston, AL on May 15, 1961.  This exhibit is titled “We Are Prepared To Die”. 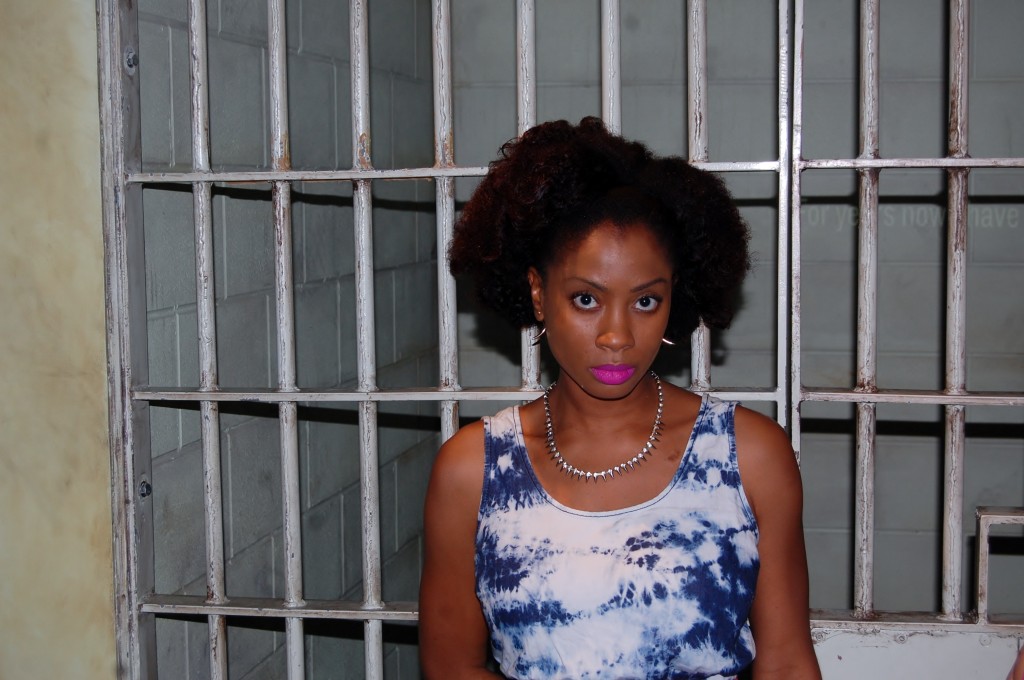 A recreation of a jail cell in Montgomery, AL where Martin Luther King, Jr. was held in 1963.

The “For Jobs and Freedom” is an exhibit for the March on Washington in 1963.

“How Long, Not Long” is the exhibit that displays the Selma, AL voting rights campaign of 1962.

This exhibit is touchingly called “I Am A Man: Memphis Sanitation Strike 1968”. I’d never heard of this strike prior to visiting this museum. 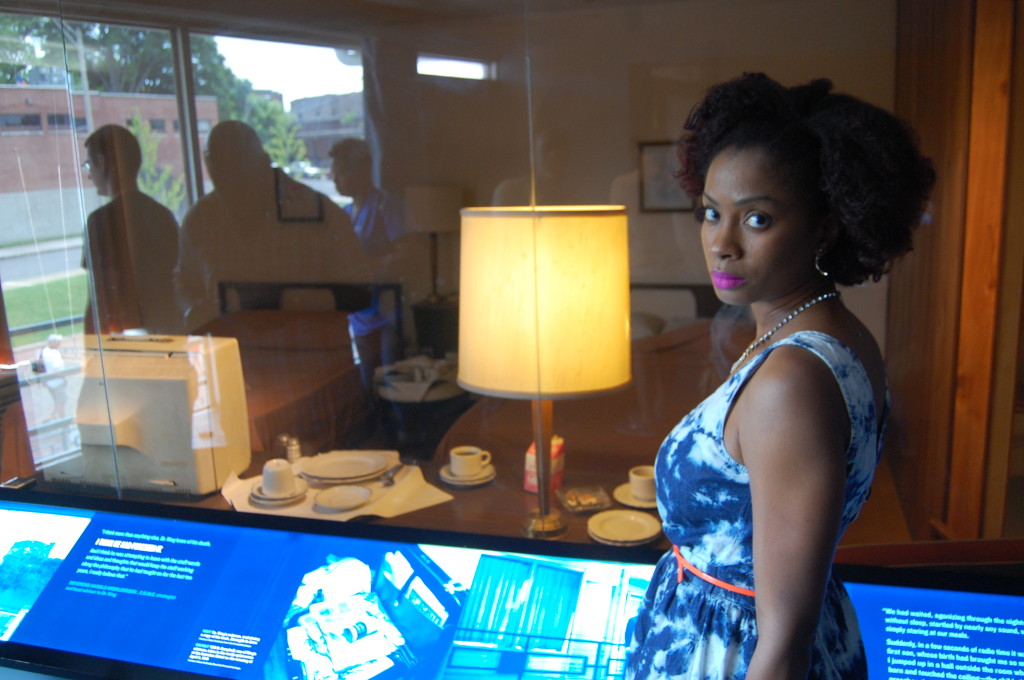 The final exhibit is very appropriately titled “King’s Last Hours” in rooms 306 and 307 of the Lorraine Motel.  Everything is set up exactly like it was the day that MLK was assassinated.

So…there was as current fascinating event/story happening outside of the museum in Ms. Jacqueline Smith, a former housekeeper and resident of the motel.  She was forcibly evicted when the motel was closed down in 1988. Born and raised in Memphis, Ms. Smith has maintained a vigil outside of the museum every day for the past 26 years encouraging people to boycott this museum. She eats, sleeps, and protests right here in this spot. On the day we met, Ms. Smith had marked her 26th year and 178 day of protest. She believes that Dr. King would not have wanted his death site to turn into a memorial/museum for profit. Ms. Smith has dedicated her life to continue in the spirit of what she believes Dr. King would have wanted. 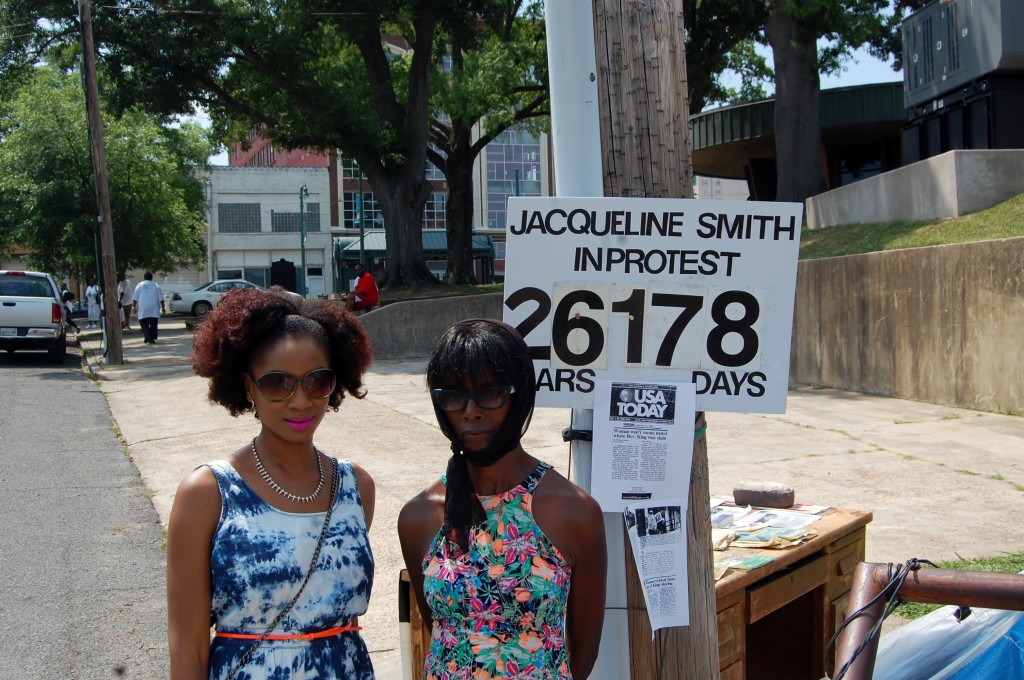 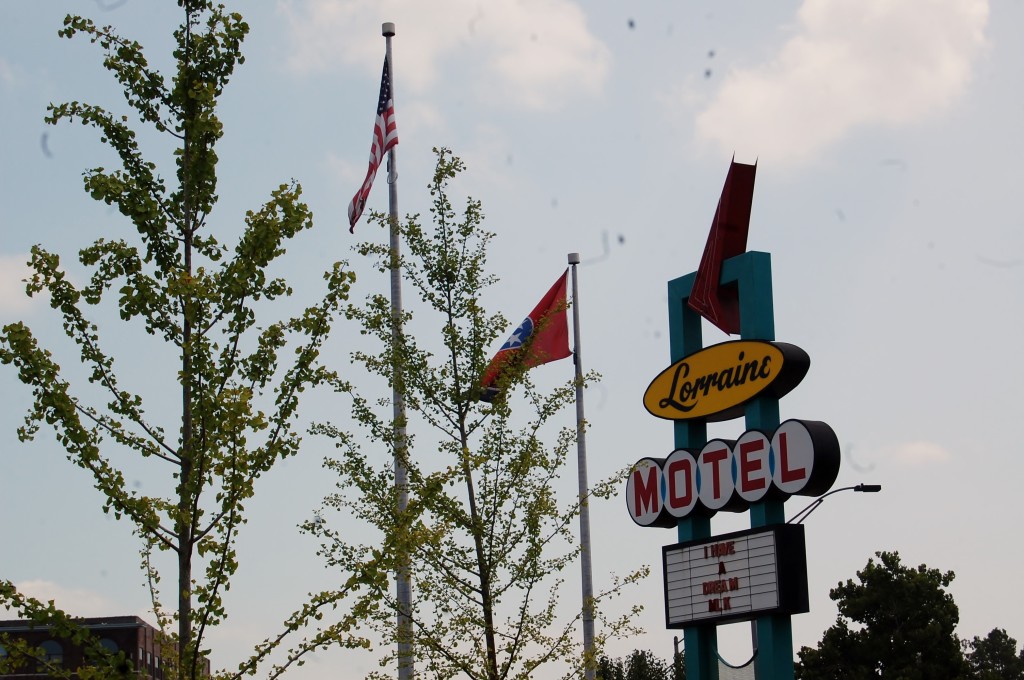 So my next stop may not seem like a big deal, but when we drove past it I just had to stop!  It was only a grocery store, but the storefront was so inviting to me, like an old-timey nostalgic neighborhood store. And actually, it is just that.  The chain of Easy-Way stores is local to Memphis, TN only and is still family operated (since 1932), and this was one of their produce only stores. The store was small and quaint.  Everyone was so nice and I must have stood out because they asked me where I was from, lol. We purchased a watermelon that fit the length of the counter! 🙂

Finally – I don’t usually talk about food, although I will confess that I take pictures of my food sometimes but I NEVER post them!  I think posting pictures of food is a little weird, so feel free to call me weird after this but the food at this place called Soul Fish Cafe was soooo good, I have to share it! 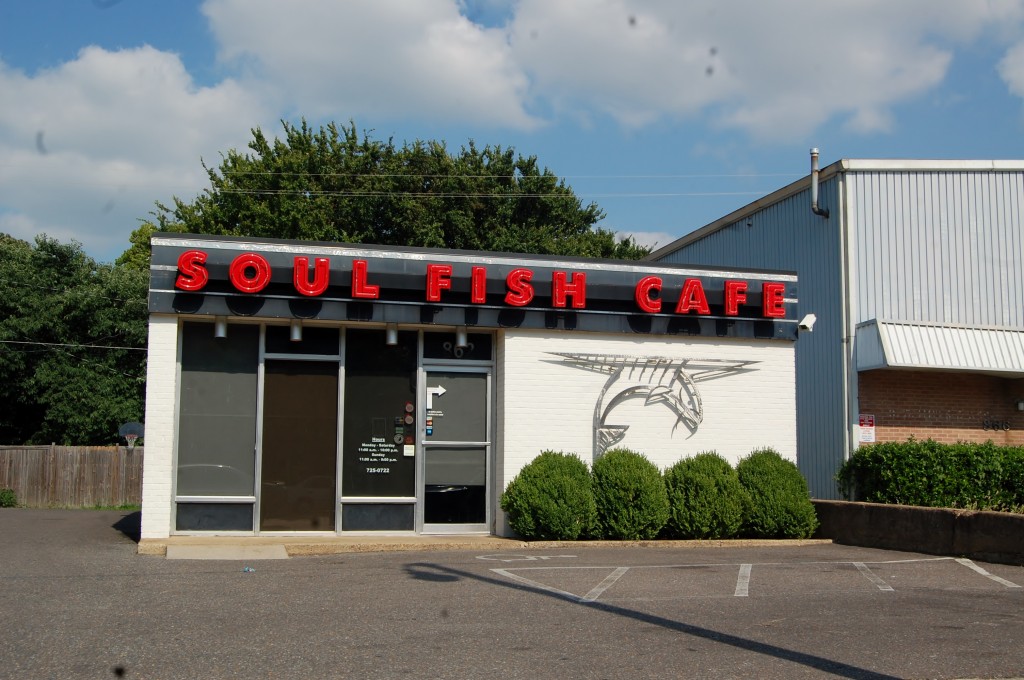 And yes, it was amazing!!

And that’s about it for my short trip out of town.  Sometimes it’s just good to get away for a minute, explore a new place or go visit a friend who lives elsewhere who can show you around.  It’s refreshing. It’s fun. It’s Life! 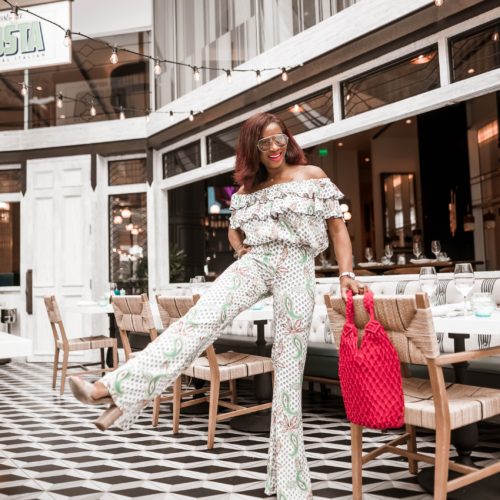 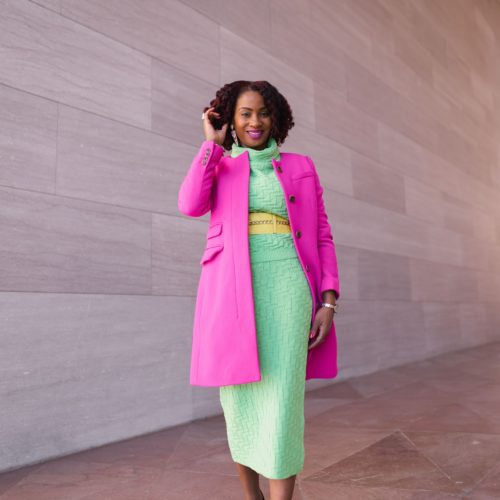