Lupita Nyong’o has become a household name as of late and a walking fashion plate.  Since being cast as Patsey in Steven McQueen’s “12 Years a Slave,” she  has been the talk of the cast even though she had some pretty experienced co-stars such as Brad Pitt, Chiwetel Ejiofor, Paul Giamatti, Michael Fassbender and Alfre Woodard.  Why is she getting so much attention you may ask? I’m not sure. What I can tell you is that after seeing the movie, all I could think about was Patsey once the film stopped rolling. What happened to her? Why didn’t the subject of the movie, Solomon Northup, grant her plea and help her end her misery? I had so many questions about her. We find out what happens to Solomon, but we never hear what happened to Patsey. All accounts of Solomon Northup’s story of being kidnapped and sold into slavery for 12 years identify as a terrible experience filled with cruelty and unimaginable sorrow, bearing witnesses to both physical and mental anguish.  But Patsey’s situation made me cry the most tears. I wanted to jump through the screen and save her myself.

Lupita can be proud of the way she captured the soul and story of Patsey. I think the real Patsey would have been pleased with Lupita’s portrayal of her experience on that hateful Epps plantation, where she was the object of the Master’s lust and cruelty all at the same time. Lupita states “For me, my challenge was just to do this woman justice because this is a true story. The woman that I met in Solomon’s autobiography was astounding, so astounding that he took time to describe her history so specifically. She left a mark on him. So that was my concern, to do right by Patsey. For it to be viewed now and see that she’s resonating with people – I’m relieved. I feel relief because I feel like I did my best, and my best translated. I’m so excited about that,” she told Shadow&Act.

On watching herself on film, she told The Huffington Post: “I was a wreck. I cried from the moment that Solomon was in shackles to the very end, through the credits and then probably for an hour after. It was a cathartic experience. I was happy to be in that kind of condition, where I’m confronted by so much humanity.”

Lupita did an excellent job and we are so happy for her.  We LOVE seeing her face in every magazine and the recognition is well deserved. It’s also great to see a dark-skinned woman be a face of fashion, poise, and grace in the often very light-skinned eye of media. She’s recently been called fashion’s “It” girl by Vouge Magazine. She’s beautiful, talented, and has great fashion sense.We are grateful to American media for recognizing her quality and giving her the respect she is due.  Diversity and race is a real issue in America, and  bringing more and more women of color to the forefront helps us break down the stereotypes that have plagued the country for centuries.

In speaking of race in America, Lupita tells the Ottawa Citizen“I didn’t grow up thinking I was black,” she says. “I was a girl, I was my ethnic group which is the Luo. I was middle class. I was short. I was dark. But the word black didn’t come up as often as it does here.” Coming to America, “you have to play catch-up as an African,” she says. “In America, more so than in Africa for sure, your race determines people’s perceptions so deeply in a way that you may not have considered. You have to learn to be black in America, you have to learn what comes with the skin colour.”

So how does Lupita feel after being cast in such a large roll, her FIRST roll, just three weeks before graduating from Yale School of Drama? She stated “It’s definitely an exciting time in my life right now. A lot of the time it feels quite magical, and I feel it’s like an outer-body experience,” she told PEOPLE about making her debut in one of the most talked-about films of the season. “I’m still trying to get over the fact that my name is being mentioned with people like Brad Pitt. Every day new things happen in my life, and I’m taking it day by day. When I was cast in his film, surely I was going to meet him one day. I wouldn’t say I was starstruck. I was stunned, and I was like, ‘Yup this is actually happening.” Yup, it’s happening! She is not only a huge success on the big screen, but also on the red carpet. This past weekend she wowed the crowd and blazed the Golden Globes red carpet in a red Ralph Lauren gown. Yessss!!!

But it doesn’t stop there. Lupita is one of the faces of the Miu Miu Spring 2014 campaign (images by Inez & Vinoodh). The sister brand of Italian powerhouse Prada is known for their bold colors and off-beat styles. Lupita represents the brand to the fullest! 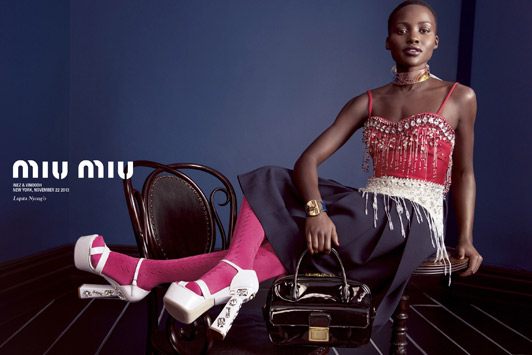 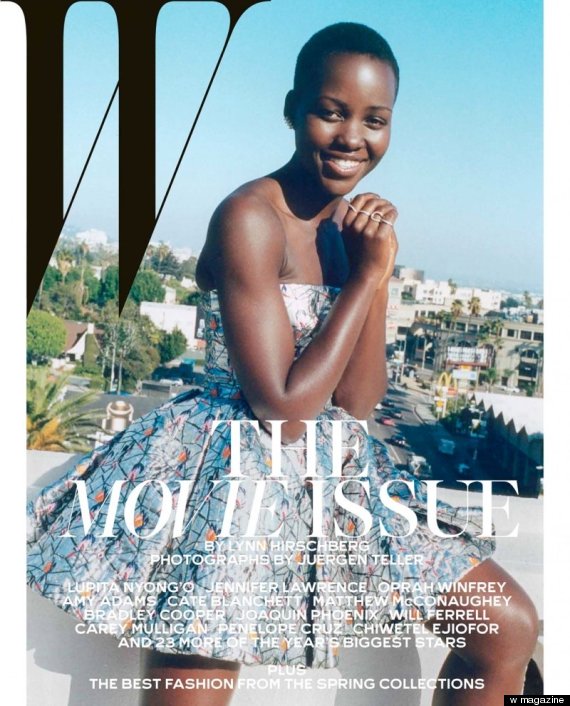 And….she’s featured on the February issue of Dazed & Confused :Girls Rule the World. Photographed by Sharif Hamza and styled by Robbie Spencer.  We looove the colors! Bold and beautiful. 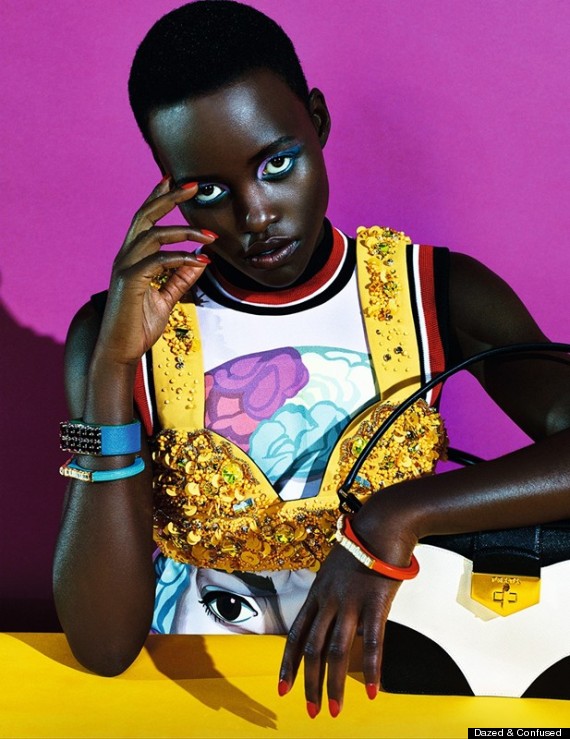 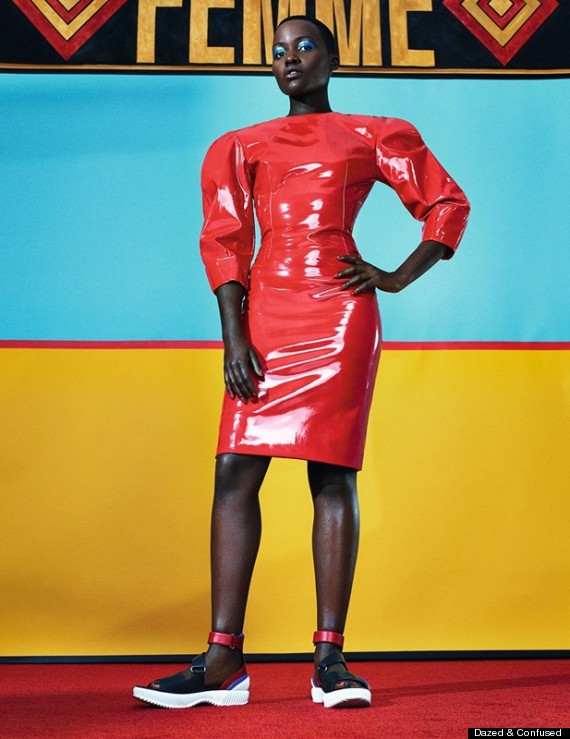 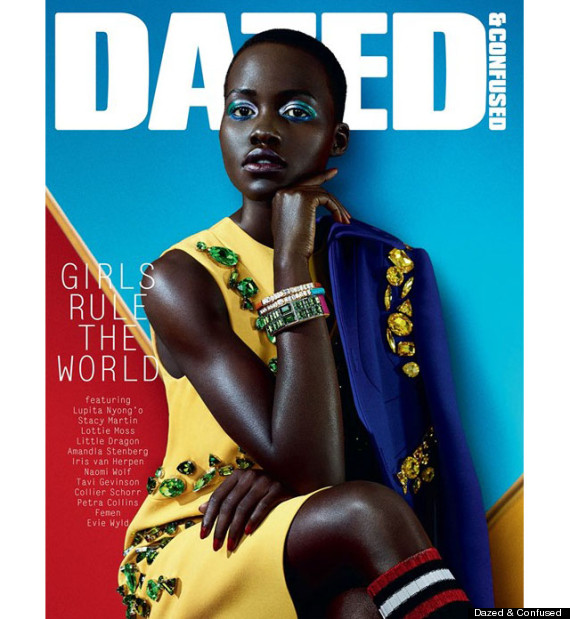 Lupita is doing her thing and we can’t get enough!

She was in the December issue of In Style Magazine in a shoot entitled “Swept Away.” The shoot features Lupita in colorful pieces from the likes of Prada, Gucci, Rochas, Dior, Suna, Missoni, J Mendel, Chanel & Reed Krakoff. 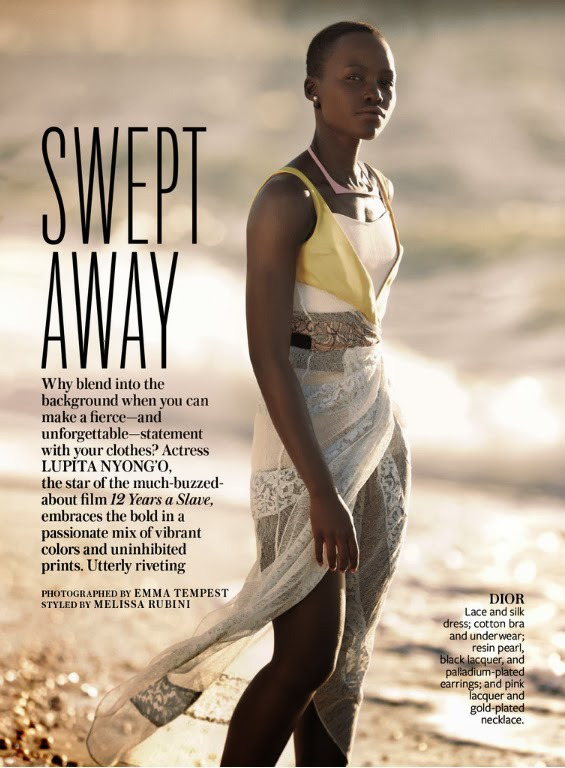 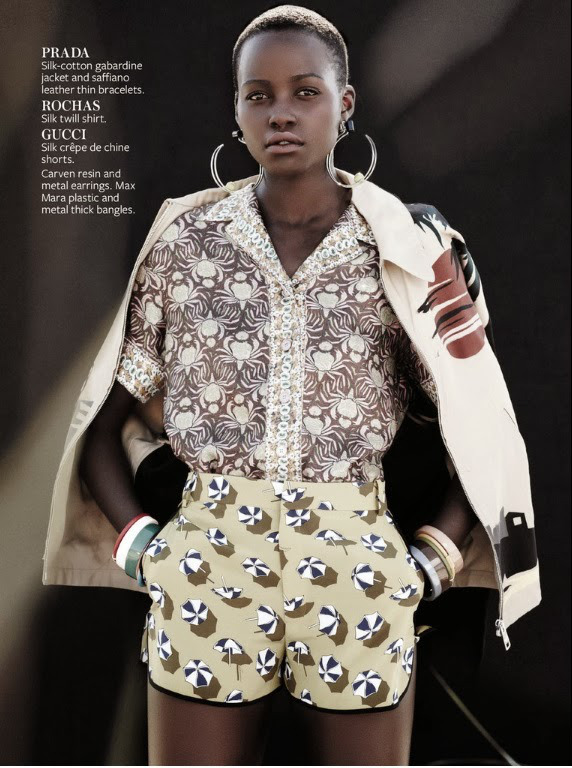 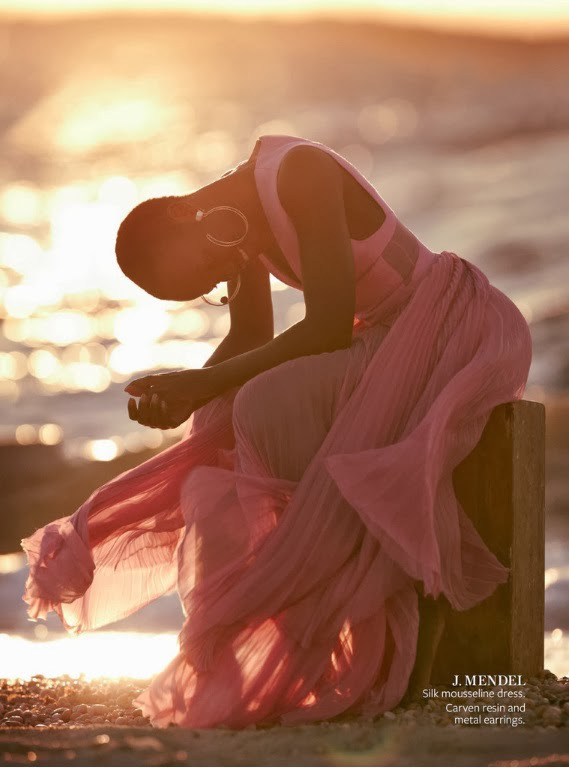 Lupita has also been featured on the cover of Dujor Magazine for their Winter 2013 issue, photographed by Steven Pan and styled by David Vandewal.

Lupita looks great in everything she wears.  Her flawless skin and closely cropped cut make it easy for her wear a variety of looks and own them.  She talks about her new style status and being called Fashion’s “It” girl by Vouge in an interview with Arise Entertainment 360 stating:

“It’s thrilling. This is an area that I didn’t plan for and that I’m enjoying. It’s something new that I’m learning. What’s becoming very obvious to me is that fashion is art. And it’s so great to be introduced to designers who are doing things that express something about me. I’m loving finding myself in clothing.”

Fashion is Art. And Lupita is a great canvas! She’s Style Stamped to the 12th power!!

Look out for Lupita in her upcoming role in the Hollywood film “Non-stop”, featuring legends such as Liam Neeson and Julianne Moore together with Michelle Dockery and Anson Mount.  We can’t wait! xoxox. Stay StyleStamped!