Nicki, Nicki Nicki. I’ll be honest, the Pink Barbie rapper from Queens and fashion is not something I ever thought would grace a Style Stamped page but..here we are. Things change. People change. And ladies and gents, Nicki Minaj’s fashion has changed. Let’s just be honest and keep it 100. I thought shorty had schizophrenia and between her and Roman, she kept me confused. And let me add that her Harajuku style and rainbow wigs kept me terribly uninterested.  But something has happened over the past year and a half with the Anaconda artist. And…we like it….gasp! 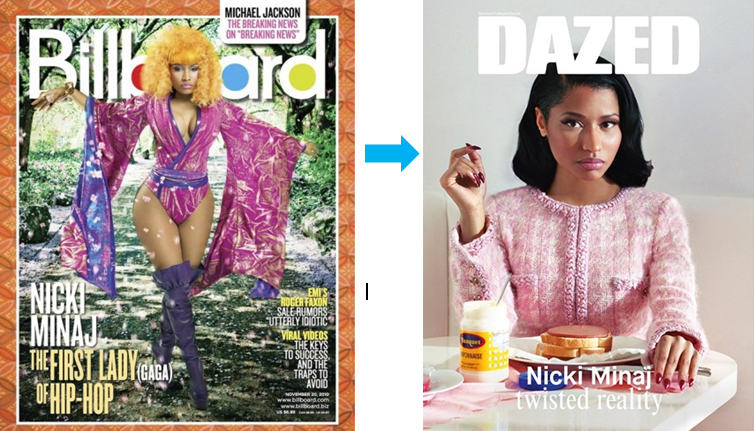 We’ve all been eyeing the transformation of Barbie over the past year after she allegedly gave her glam squad the boot in order to gain a more serious look. And from there the transformation seemed to begin. She started  leaving behind the frou-frou Rainbow Brite wigs and while not totally leaving behind the color, she did halt at just one color, blonde. But we haven’t even seen that wig lately, or any wig at all. According to her hair stylist, she’s been wearing her hair all natural and we must say that if that’s the case, she has some major hang time going on.

I follow her IG and it was all blah blah the usual until I saw her in these John Galliano bow heel platform pumps and cute outfit that she wore to grace the cover of ESPN Magazine with Kobe Bryant earlier this year. I remember thinking wow, she looks cute!

We have to admit, Nicki is a beautiful girl and that we could always tell. But now we can really tell. Without all of the overpowering makeup and eccentric wigs and outfits, I think she is being taken a little more seriously. I mean, she got my attention and I have truly always looked at her as a joke. And I probably still wouldn’t have written this article if it weren’t for the pictures released this week for Dazed Magazine’s Autumn/Winter 2014 edition. When I saw her photo spread, I felt something I’ve never felt for Nicki before; interested. Truly interested, like say word, is that Nicki? In our opinion, it’s her best look ever and the whole serious look, well, its working. She’s looking more and more Style Stamped every day! 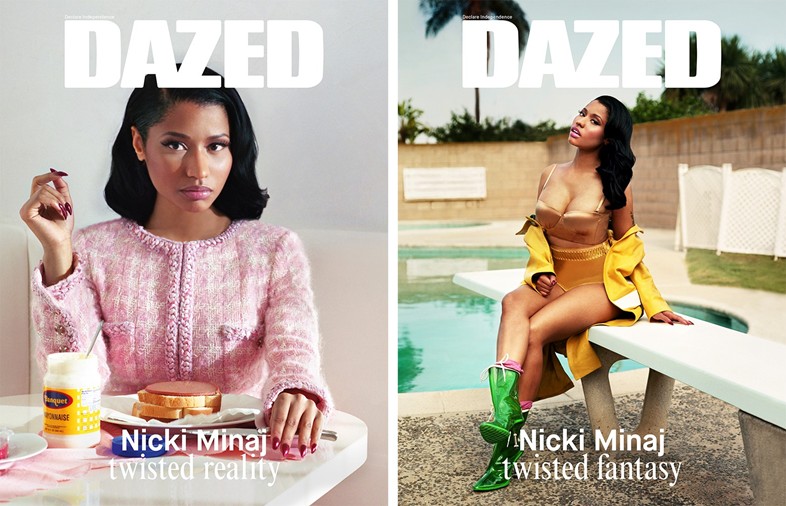 This is grown and sexy:

This is classic (And our favorite):

How about a round of applause?? I’m not really sure what other kudos’ are in order for this print fashion feature win but seeing these pics definitely made our eyes and fashion hearts happy.

So just for one second, I feel the need to point something out. A few reasons I was never into Nicki like that is because 1. I always thought she looked ridiculous…fact. 2. I don’t want my child to think that’s how you are supposed to come out of the house looking. 3. Her lyrics for this day and age are not exactly “young-mind” friendly, and neither was her look. And she has major influence with the younger crowd, or so I’ve heard lol. As she stated herself on the Lloyd f/ J. Holiday & Nicki Minaj “Take It Off” (2009) song: “If I eat it, then everybody gonna order that/Everything I do, these B!^*s wishin they’da thought of that/I’m an Indian Giver, I want the quarterback/If hip-hop was dead, B!^*s I just brough it back.” ~ Basically, whatever Nicki does these chicks are looking, and following. So even if she hasn’t cleaned up her lyrics (i.e.”Anaconda”), she at least has one half of herself headed in a good direction. Her style.

We had to come back for more! Nicki not only released her new album, but she’s also the new face of Roberto Cavalli, as of today! Check out her campaign photos, all of which get more and more amazing…(Photos courtesy of Francesco Corrizzini/Roberto Cavalli)

She’s on the move…we will continue to keep watching her style transformation!

What do you think of Nicki’s transformed look? Leave a comment!

Lighten the Mood with Grey
NYFW Street Style ss15: Who what why wear?
Fall… Into A Denim Shirt